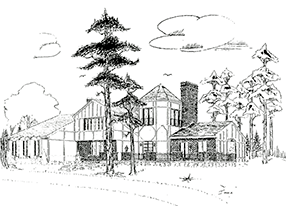 Nestled in the forests of Hampden on the Penobscot riverbank

Nestled in the forests of Hampden on the Penobscot riverbank

In 1971 a group of interested citizens, including Edythe L. Dyer, founded the Hampden Regional Library. The public library was located in the high school library where it remained with the hope that a building of its own would someday be available.

That hope became a reality in 1983 when Mrs. Edythe Dyer moved to Mount Desert Island and gave her two year old Hampden home to the residents of Hampden to be used as a public library.

Storytime children made cards for Mrs. Dyer at most holidays and she had just received her 1995 Valentine’s Day card shortly before she died from injuries sustained in a car accident on February 22nd.

Monday-Thursday 9am to 7pm

Friday 9am to 5pm